Here is a sample selection of stories. You can read them by clicking the image, or the link, or both!

It’s easy for Japan to feel familiar, but don’t settle for the same-old. I round up some hidden gems that will make this well-trodden destination feel anything but familiar.

Want to enjoy spring the Japanese way? Head out between March and April — preferably with a packed picnic — for the great cherry-blossom party known as hanami. Japan has thousands of sakura spots, but these are five of the best.

In this cover story, I preview a property on the AIA Austin Homes Tour: a 107-year-old stunner with a clever, contemporary secret.

Mixing the old with the new Austin HOME (Fall 2015)

A 1930s bungalow keeps its old school charm while getting a fresh makeover.

Big fashion labels are creating stylish products from renewable materials, which means friends of the earth have never looked better.

Wellness holidays are all about state-of-the-art treatments, star fitness trainers and healthy food that doesn’t taste like it.

It’s easier to shop sustainably as stores reduce their waste in creative ways.

Crowd funding sites like Kickstarter are helping green projects come to life. I do a summer round-up for my first EcoWatch column for Silver Kris Magazine.

What is STEM? Why is it important? Where can it take you? I put together a guide for prospective students at the University of Sydney. WARNING: 3 MB file.

Chink found in armor of invasive Crazy Ant University of Texas at Austin, College of Natural Sciences (May 2015)

If you think fire ants are annoying, meet the Crazy Ant, which can swarm to cover a dog in minutes. But UT scientists have just discovered the first pathogen known to kill the ant pest. I find out what this means for biological control. SCIENCE

In this cover story, I visit a jaw dropping lakeside home designed by Lake|Flato Architects, the firm that’s the last word in indoor-outdoor homes in Texas. Full stop.

It took 60 years for anybody to pluck up the courage to build a residence next to the infamous, party-central lake Austin cafe known as Ski Shores. This is the result.

Supercomputing deepens understanding of life University of Texas at Austin, College of Natural Sciences (May 2015)

Biology is having a Big Data moment. Here’s how life scientists at UT Austin are using high performance computers to make sense of the torrents of digital data now at their fingertips. (Video and story by me!)

Want to know where you can see wildflowers in their millions? I scour the globe for floral festivities that will be worth your while.

You know the Circuit of the Americas? Architect Juan Miro was the brains behind that. His family home is a more down to earth, but no less striking, affair.

Forget the Eiffel Tower and love locks bridges. Take your Valentine somewhere they’ll never forget. I search the world for  romantic destinations with a difference.

He’s been called the “Brad Pitt of bonsai”, but Bjorn Bjorholm is much more gen Y than that. Meet the young American who is shaking up the ancient world of bonsai, tree by miniature tree.

Four biologists from UT Austin lead an expedition into the remote, dangerous and singularly pristine rainforest in the Darien Gap.

After living in Osaka for 18 months, I have fun putting together a city guide for Singapore Airlines on what to do, and where to eat and sleep.

It takes two: how mutualisms evolve in a world of selfish genes The Conversation (November 2014)

An article co-written with UT biologist Dr Jordan on  mutualism in the light of evolution.

A husband-and-wife marketing duo play to their strengths when they collaborate with a talented designer for their home.

Prepare to be impressed by this innovative take on the traditional Texan ranch.

For Austin Monthly‘s biannual wedding special, I interview four couples to hear how they made their special day stand out.

Having built homes for luminaries including Lance Armstrong and Mac Brown, Michael Deane is Austin’s “builder to the stars”. He gives me a tour of his amazing family residence.

Imagine a lush, green garden that requires no watering…in Austin…in a stage 2 drought. I meet a landscape gardener who makes this fantasy a reality.

Austin-based interior decorator Marc Cravotta gives me a lesson in decorating with kids in mind.

I speak to Kristi Owen to find out how a new year’s resolution four years ago led her to become one of Austin’s most successful bloggers.

Since the “original db” was born in 2001, the gourmet burger has been on the rise. I find out who’s doing it best right now.

I go into the home kitchens of Austin’s top chefs to find spaces that are simple and refreshingly gadget-free.

In this cover story, Austin’s “It” lifestyle blogger, Camille Styles, gives me a peek into her sophisticated yet laid-back home in Mount Bonnell.

The Dripping Springs home of architect, Tim Brown, shows just what you can do with a bit of creativity, lots of planning and a deep understanding of the environment.

Ecotourism and volunteer vacations are great in theory, but how do you know you are really making a positive difference? Two experts give their tips on how to do “good” travel properly.

The Hill Country west of Austin is a food and wine-lover’s paradise.

I interview Austin’s top florists to get the inside scoop on how soon-to-be brides and grooms can best plan for their wedding. Written for a biannual wedding special in Austin Monthly magazine.

In the historic neighbourhood of Clarksville, Austin architect and AIA Fellow, Miguel Rivera, restores an original bungalow and adds a modernist extension.

Out of their home garage in Austin, French sisters have started crafting eco-friendly decor pieces out of reclaimed wood and steel.

In this story, I visit Japan’s unofficial tea capital to learn the secret art of tea.

Matcha is the most exquisite of all green teas, and one company in particular is known for making the finest of all.

Get the scoop Kansai Scene (August 2013)

In the thick of Kansai’s brutal summer, I round up the best gelaterias in town. 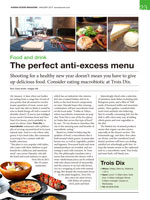 The macrobiotic diet might have started in Japan, but the country’s second largest city has surprisingly little on offer. I review one of Osaka’s only macrobiotic restaurants.

A world heritage-listed site has relaxation down to a 1000-year old art.

A town built around the business of hot springs (fancy a hot spring soda?) makes a darn fine day trip from Kobe.

Plastic food is big business in Japan, and Osaka is the unquestionable epicentre of this unique art.

Ramen, the ultimate in Asian fast food, has a cult following in Japan. I spend one day as a ramen addict to find out what it’s all about.

In the ancient capital of Kyoto, I discover a gem of a cafe housed in a former Japanese bath house.

The neon, carnival-like zone of Shinsaibashi is tourist central in Osaka. For locals, it can sometimes be hard to know where to eat. Here are five gems well and truly under the radar.

A small town in north-west NSW, Australia, is home to the only growing population of koalas in the state. Find out why.

Nestled in a mountainous region, Kyoto isn’t the first place you’d expect to find an aquarium. But the world heritage-listed city’s first establishment of this kind is still a great day out for the family.

Late summer is bloom season in Australian waterways. This story looks at what we know after years of studying them, and what, if anything, we can do to prevent them.

One thought on “Writing”